It was through the initiative of the New Zealand Province that the presence of the Marist Fathers in the Philippines was made possible. On November 24, 1981, the first group of Marists arrived in Manila, Philippines. The group was composed of Kevin Stewart (New Zealand), Kevin Mowbray (New Zealand), Brian Keenan (Ireland) and Nisi Oto’ Ota (Tonga). Because of a strong storm in Manila at that time, the group decided to stay there and for a little while enrolled themselves into Tagalog classes.

After learning the Filipino language in Manila, the group then went to the southern part of the Philippines in August 1982 and situated themselves in Cotabato City (8 hours away from Davao), staying in one of the Marist Brothers houses. After settling in, in 1984, the group organized a mission in the remote areas of Kalamansig and Lebak Sultan Kudarat, which are located in the southern-most part of Mindanao, 12 hours away from Cotabato using lantsa (an engine powered small boat). Kevin Stewart was assigned in Kalamansig and Brian Keenan and Michael Ryan were at Lebak. The group stayed there for 8 years.

In that same year (June 1984), the Fathers were invited to take over the Parish in Kabacan, North Cotabato (3 hours away from Cotabato by bus) where Kevin Mowbray became the parish priest. After having so much experience in mission in the rural areas, the Marists decided to form again another mission, this time to Diwalwal. This is up in the mountains and was a well known gold mining site. To get there you had to travel four hours by bus from Davao City and then for an hour on a motorbike.

In 1989, Larry Sabud (first Filipino Marist) was professed in Fiji. After several years of working in areas in the southern-most part of Mindanao, in January 1991, the Marist Fathers took the initiative of founding another community, in Davao City. This group was composed of Pat Devlin, Larry Sabud and Rob Devlin who rented a house in Bajada.

In 1992, another milestone took place in the district – the founding of Balay Pasilungan (a street children institution), which came about through the initiative of Rob Devlin (New Zealand) who also had the role of executive officer of the institution. At the same time, the Marists were invited to minister in a chaplaincy program in Davao – Pat Devlin became the first Chaplain of the University of Mindanao. The University was the centre of tertiary education in Davao at that time and it catered for thousands of students in different courses. In the same year, there was a growing interest in vocation to the Marists with several young men coming on board. Because of this growth, the Marists appointed Mars Lavarez as the first lay Marist to become the Vocation Promoter.

As the years passed by, the number of Marist missionaries here in the Philippines grew. Gavin Foster (New Zealand), Pat Muckian (Ireland), Aliki Langi (Tonga), Joe Mclaughlin (USA) were welcomed here as part of the district, the number of seminarians had grown in number, and in the early 90′s, a total of 27 seminarians joined the junior program. Some of these seminarians were ordained Marist priests now.

Being true to its mission, to spread the love of Jesus in Mary’s way to the abandoned

, neglected and the poorest in the community, the Marists once again formed another mission area in 1997 – this was in Kalabugao, Bukidnon, five hours by bus from Davao City and three hours on a motorbike. It is inhabited by Lumads (native people) with only a small number of Catholics. In that same year, the Marists formed another community in Dumalag, at the heart of Davao city. This time, they were living in a squatter’s area near the seashore, which is the same location of the Marist Novitiate today. The community at that time was composed of Joe McLaughlin (U.S.A.) and Pat Muckian (Ireland).

In 2000, the Marist Sisters arrived in the Philippines through the invitation of the Marist Fathers and in 2004 the Marist Fathers began to spread through Asia with a community starting in Burma (Myanmar). This team was composed of Joel Aliligay (Philippines), John Larsen (New Zealand) and Ronald Lida (Filipino Lay Marist). However, because of some conflicts there, the group left Burma and settled themselves in Ranong, Thailand. The Marists there cater to the Burmese refugees, AIDS victims and many more. Also in 2004, another community was formed in Digos City (1 hour by bus from Davao City). The main ministry is the Campus Ministry at Digos National High School which has a population of 5,000 students. The Marists also are chaplains to two prison jails in the city.

In 2006, a group composed of Aliki Langi (Tonga), Fernando “Anggong” Ingente and Cyr Landre Avalegbe (Africa) took over a Parish in Timanan, Maguindanao. This place is a mountanous area three hours from Cotabato City. Half of the population of Timanan are Tiduray (tribal group), 25% are Muslims and the other 25% are Christians (not all catholics). The Marists completed their tenure here in May 2012 and handed back the Parish to the Oblates of Mary Immaculate. In this same year, Larry Sabud, the first Filipino Marist was appointed as District superior. 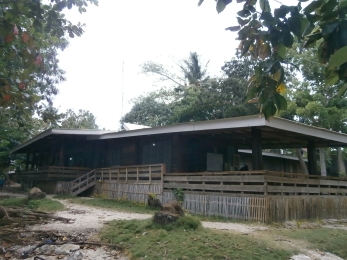 In 2009, history is made in the Philippines throughout the whole society, because the First English Language International Novitiate was held here, in the same place that was setup in Dumalag 12 years ago, although now substantially renovated. 6 Novices who come from Germany, Spain, Philippines, China, New Zealand were took vows in Davao City in March 2010.

Almost the same year, the District purchased a house and a land in the middle of the city which is now the Colin District House. It is a house for administration as well as hospitality for any Marists who come in Davao. The house is located at Morning side Heights, Bajada, Davao city. It is very near the airport, shopping malls and a Church. The house was sold in 2017 November.

In June 2012, the District has revived the College formation program in Dumalag, Four college seminarians started the program. In October 2012, the Formation house of the District was moved from Dumalag to Bangkal, Davao City. In the same year, a pastoral area in Matti, Digos City was given by Bishop Guillermo Afable, DD to the Marist Fathers to look after and be established as a Parish in the years to come. The pastoral area is called Matti District Catholic Center which has a population of 11,000 Catholics. It has 24 Chapels, 1 college school, 2 high schools and 7 elementary schools. The Marist Fathers also serve the 2 jails of the city. On 13th May 2019, the pastoral area was now established as a parish of Our Lady of Fatima. 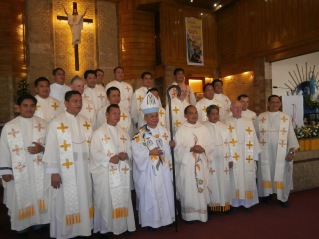 SM from New Zealand Province arrived in Ranong Thailand to join our District. In the same year, the Marist Fathers took over the management and running of the Balay Pasilungan. We also accepted on the same year the request of Arch. Valles to work in Campus Ministry administering to 10 non-sectarian schools in Archdiocese of Davao.

In May 2016, three Marist seminarians were ordained deacons by Bishop Guillermo Afable, DD, Bishop of Digos at Matti District Catholic Center.  In October 2016, the Marist Formation House moved from Dumalag to Tulip Drive, Davao City. The District house is also located in this place.

In November 2016, Fr. Roque Rebito, SM and Fr. John Gouwang, SM were ordained to the priesthood by Arch. Romulo Valles, DD, the Archbishop of Davao at Mother of Perpetual Help Parish, Davao City.

On 1 June 2018, Fr. Chris Ganzon, SM was appointed by the Superior General Fr. John Larsen, SM as the next District Superior of Asia. He succeeded Fr. Pat Devlin, SM who has completed his tenure as leader of the District. Elected in the District Council to assist Fr. Chris were Fr. Lauro Arcede, SM (vicar), Fr. Arnold Garferio, SM and Fr. Pat Muckian, SM.