The Feast of the Holy reminds us that we “belong by a gracious choice to the family of the Blessed Mary, Mother of God. In her name we are called Marists.”

It was the first time that the Marist communities and other branches of the Marist Family could not join and gather together in celebration as one big family because of the COVID-19 pandemic. But we remain united in prayer and in spirit.

In Davao, the Cerdon International Novitiate Community in Eden joined the celebration with the St. Peter Chanel Formation Community in Davao. The Holy Eucharist was officiated by Fr Lionel Mechavez and Fr Gil Casio delivered a homily. Some close friends and Fr Gil’s mother attended the celebration. The creative programme was organised by the students.

In 15 June 2019, 11 candidates with their parents and some family members arrived in St. Peter Chanel Formation House.  During their arrival they were welcomed by Fr. Arnold Garferio S.M. the Vocations Director.  The first day of the new group of MICS was spent for the Parents’ and MICS orientation to the Marist Interested College Students Formation Program.  It was explained to the parents and MICS what will happen  during the formation program. The Marists’ expectations from the MICS, their duties and responsibilities in taking care of the facilities of formation house, and their privileges as young men in formation were also discussed.  Parents were also informed about their responsibilities and commitment to the formation of their sons.  In one of the discussions a parents expressed his appreciation of the privileges that the Marist share to form their sons.

Fr. Lauro Arcede, talked about the focus and priorities of the MICS formation process.  Fr. Roque Rebito informed the parents and the MICS about the cost of the formation of priests, he also emphasised the need for parents’ participation and support to fund the MICS formation.  Fr. John Guo, the in-charge of academic, emphasised the need to change the mind set about study from high school set-up to the university environment, he also challenged the MICS to achieve the scholastic requirement for MICS.

The Formation team emphasised to the parents that fostering vocation is everyone’s responsibility.  From witnessing a life of loving service to others, sharing a life of prayer and community building, each baptised Christian has a role to take to encourage and support a religious vocation. 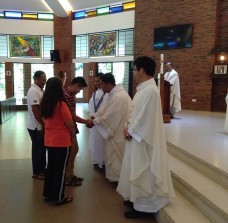 “Those who live a retreat in an authentic way, experience the attraction and fascination of God and return renewed and transfigured in their daily lives, their ministries, and their relationships.” (Pope Francis}

The members of the District of Asia-Marist Fathers and Brothersgathered on 1-7 April 2019, in Baan Petchsamran, a retreat house owned by the Ursuline Sisters in Hua Hin, Thailand. We are fortunate that Bishop Joseph Prathan of the Diocese of Suratthani, where the Marist Asia Foundation is based led us into a six-day spiritual exercise. Bishop Joseph’s easy-to be with personality helped to set the atmosphere knowing that retreat is also a time to go back to the core of our life as religious and missionaries. He started saying “I have nothing to share with you my dear brothers, just may be my failures as a bishop”. With our frailties and struggles, we learn to trust God. This is what Fr. Colin meant when he said “ You have also to learn to taste God-yes to taste God- and that is to feel your heart wounded (FS 65,3).

The general theme of the retreat was “Marists in the Local Church in the Light of Gaudete et Exsultate”. Bishop Joseph started deepening it by first showing to us the role of the Holy Trinity who is the “culmen et fons” of Christian faith. He led us into a deep reading of Andrej Rublev’s Icon of the Trinity. He re-introduced to us the beauty and importance of learning, understanding and meditating on the Word of God through lectio divina. He reminded us of that- priestly common tendency which is to assume that we know the Word of God by our first glimpse upon it. We were given opportunity to practice it and we were all enriched and encouaraged by its fruits through our small group sharing. He guided us in understanding the context and the rich meaning of Pope Francis’ Gaudete et Exsultate.

We all had given an opportunity to receive the Sacrament of Reconciliation and we all renewed our religious vows during the closing mass.

The retreat was enriching and meaningful by the fact that we gathered to go back to the source of our identity. The quality of our life and ministry reflects the manner we tend the essentials of our chosen vocation; prayer, silence and solitude, communitylife,discernment, spiritual and body execrcises.

Above all, the underlying message of the retreat is to become joyful religious and missionaries. We do not underestimate our struggles. The Christian life is a constant battle. We need strength and courage to withstand the temptations of the devil and to proclaim the Gospel. This battle is sweet, for it allows us to rejoice each time the Lord triumphs in our lives (GE 158). 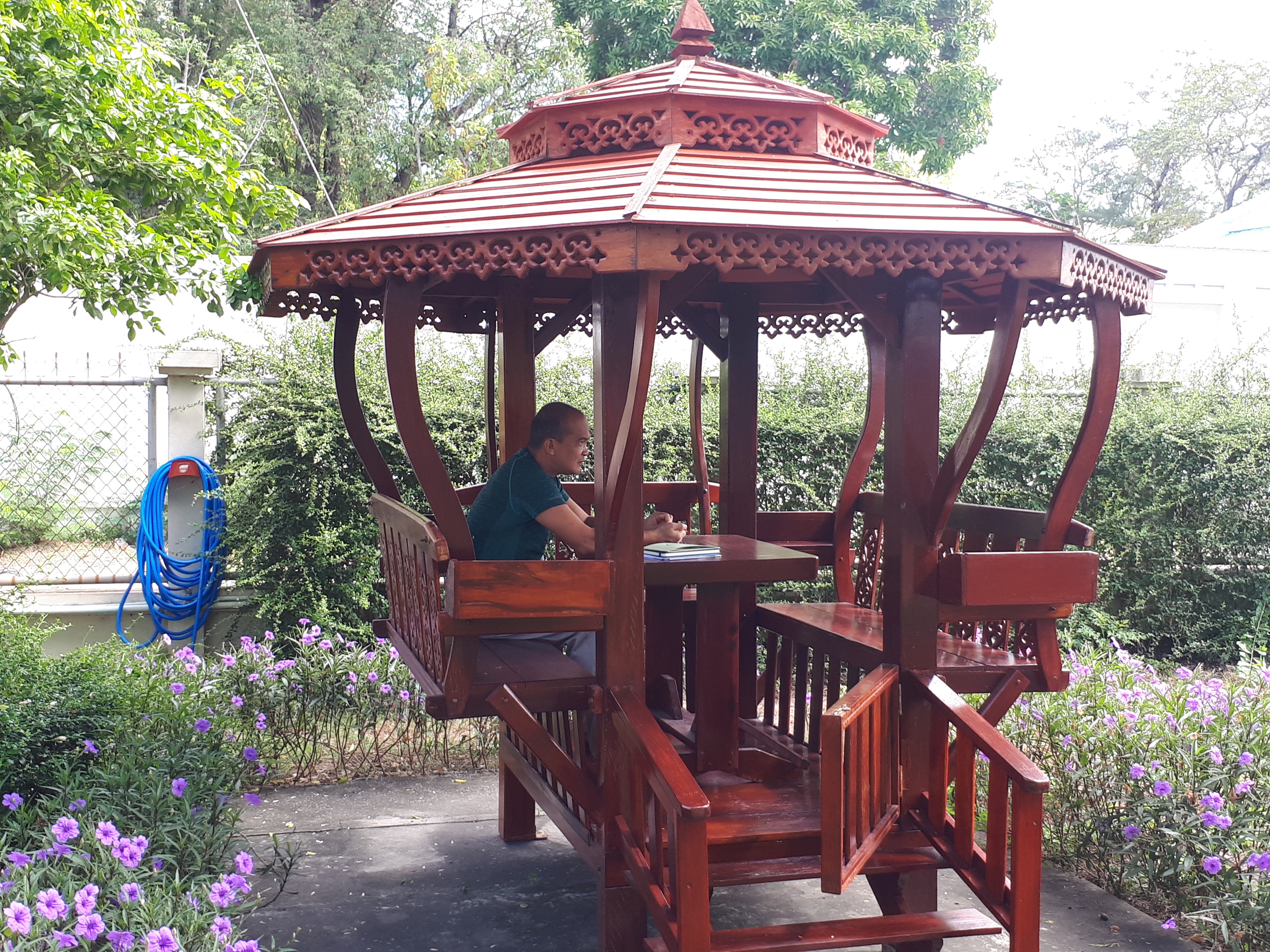 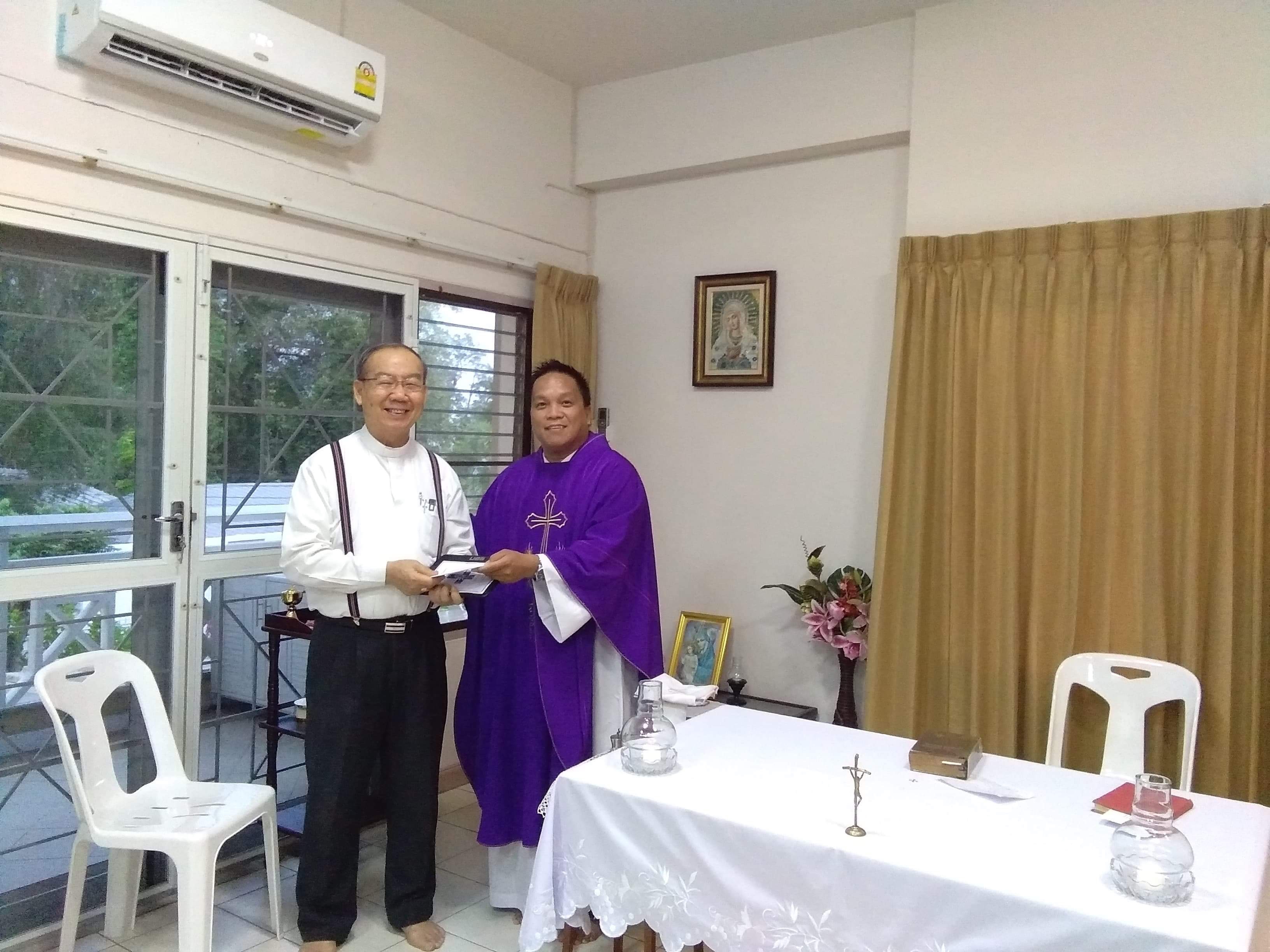 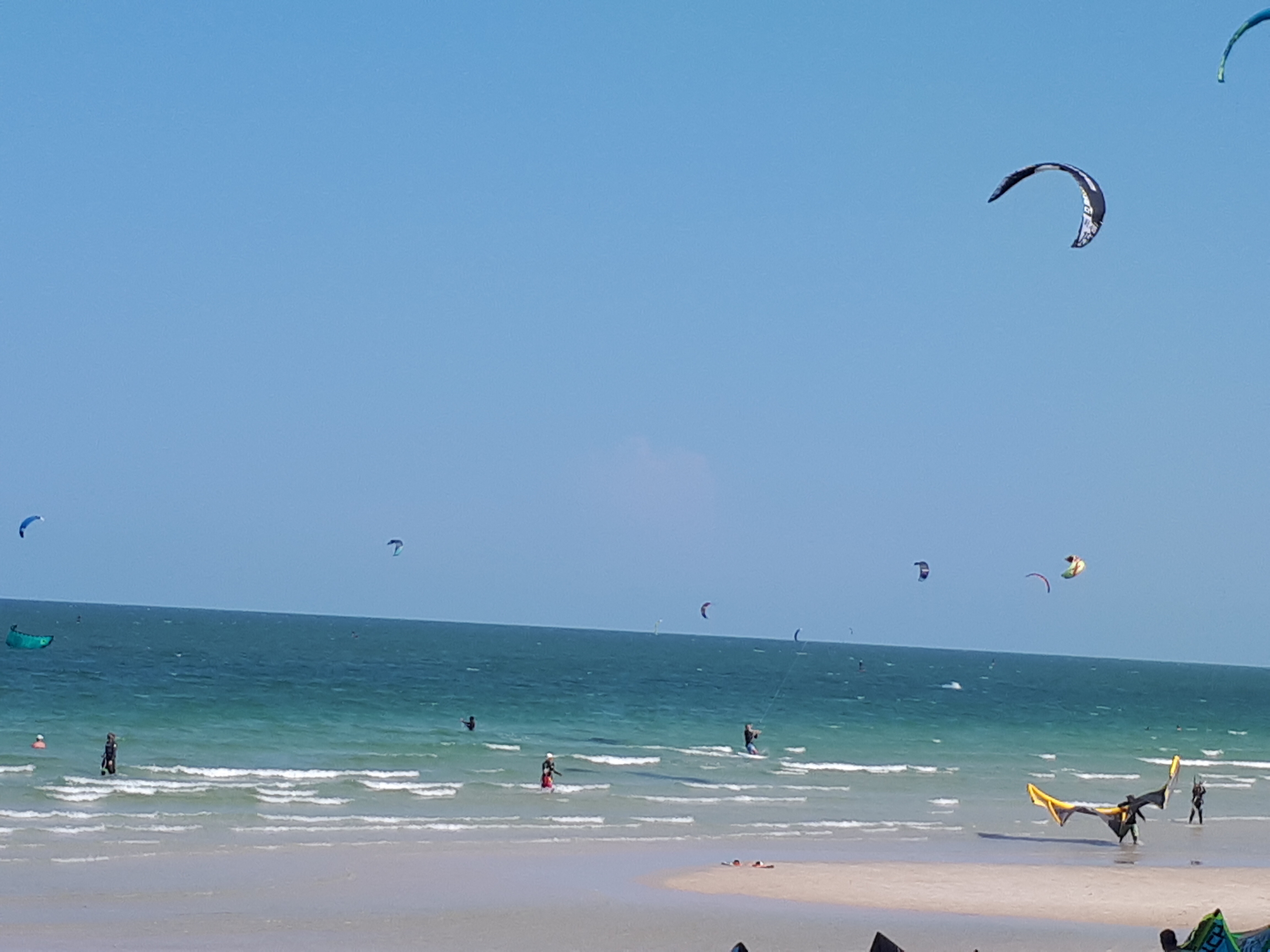 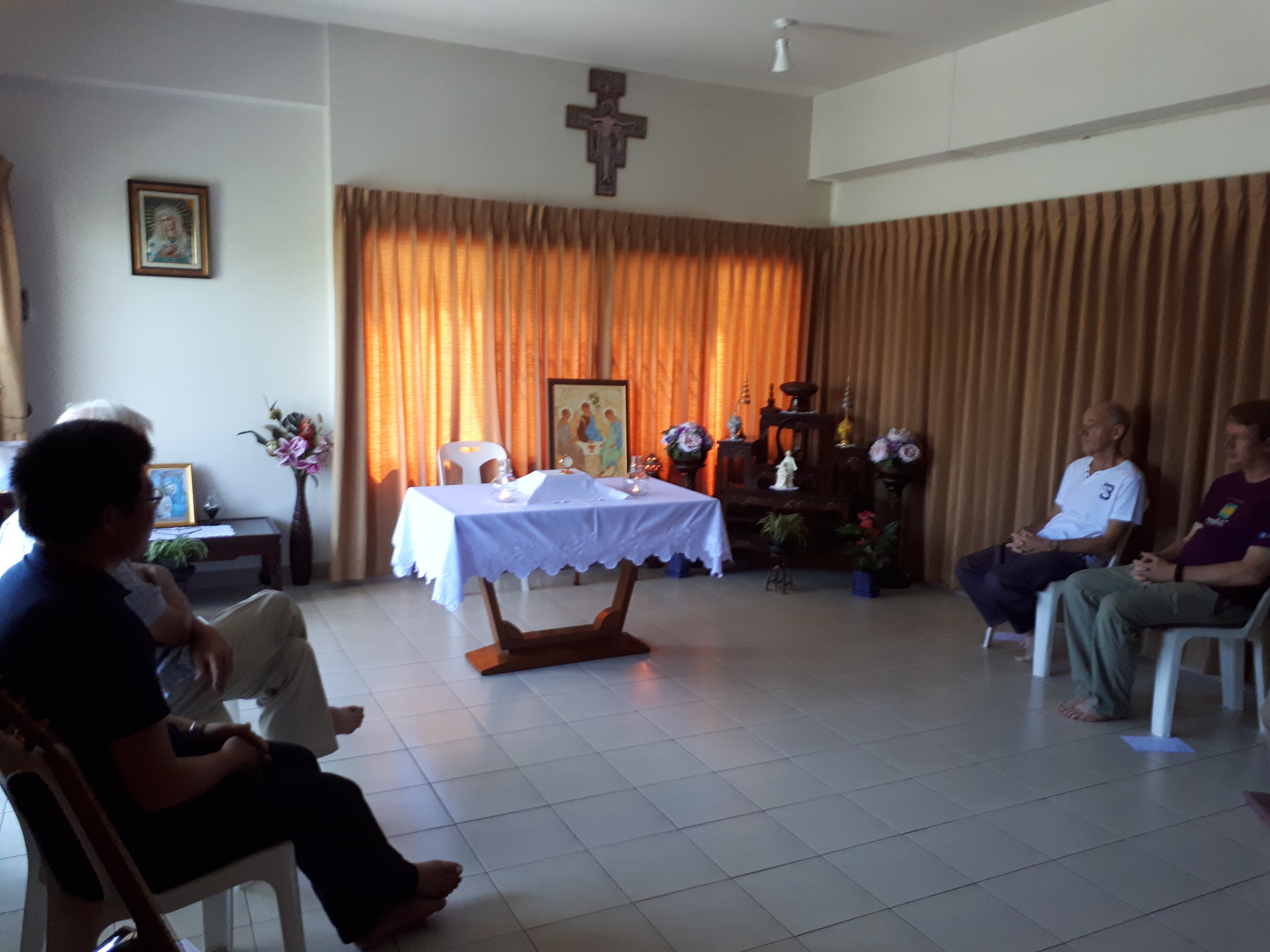 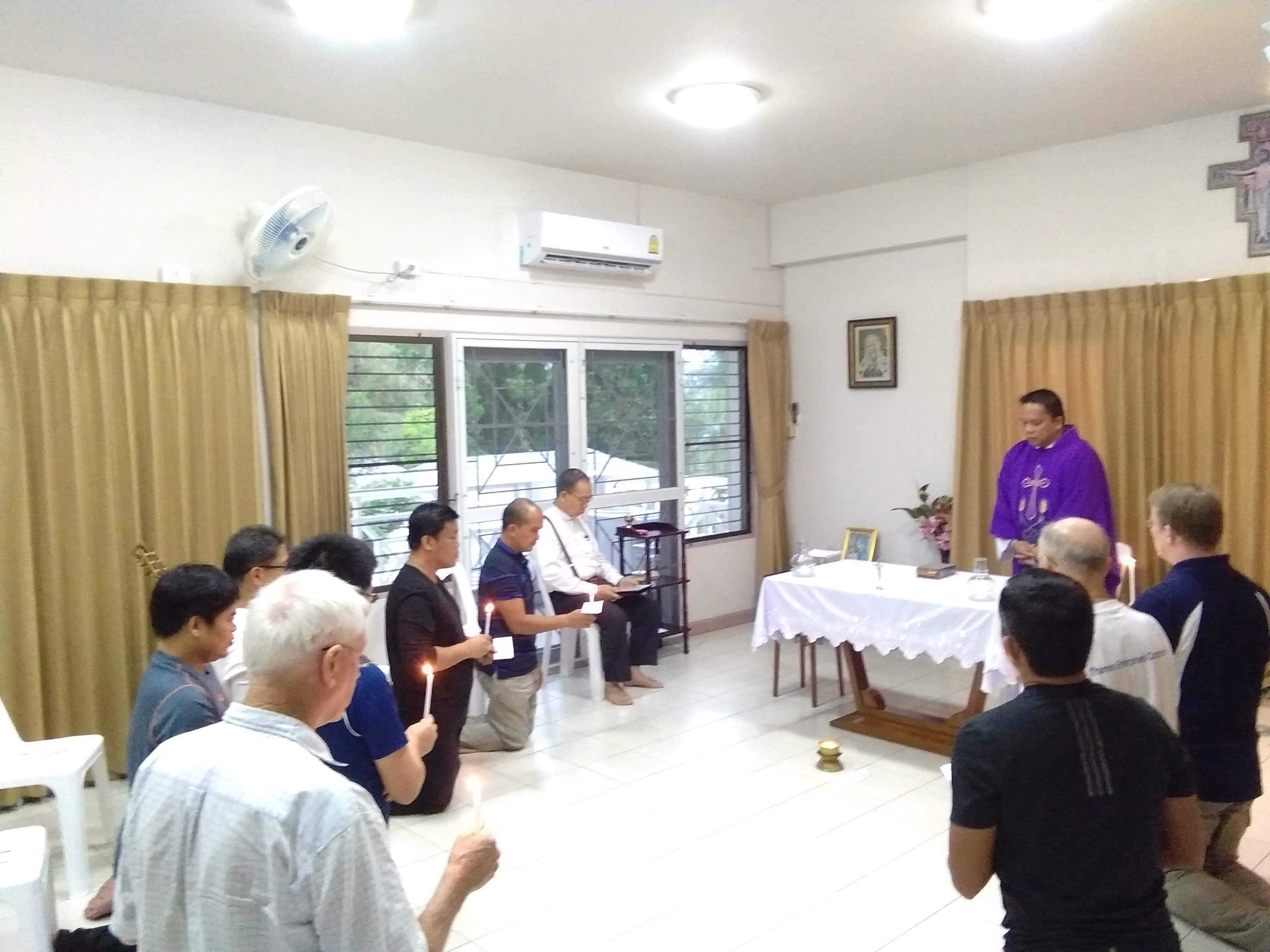 Christmas message to All

Members of the Marist Fathers and Brothers of the District of Asia held its District Assembly from 26-30 November 2018 at the District house in Davao City, Philippines. Marists from Thailand and Philippines gathered for five days to share and discuss important issues that concern the District’s life and ministries. The purpose of the gathering is to bring all the members of the District together and discern to where the Spirit is calling us as Marists at this time.

Moreover, the gathering was also intended to review the District Chapter 2016 Declarations and Decisions. Some important matters discussed were our Missions in Ranong and Digos, Vocation Promotion, Child Protection and Safeguarding, Marist Laity, and the Statements and Decisions of the General Chapter 2017.

Every day we start with an hour of Eucharistic Adoration and end it by celebrating the Eucharist. We invited Fr. Joaquin Fernandez, SM, our former Superior General to give his impression and observations of the District.  Whole day we come as a District to share and discuss agenda presented by the communities. During these times, we were given opportunity to respond and share our thought and ideas regarding issues that are decisive for sustaining our life and our ministries. The sharing was done in the spirit of fraternity, discernment, listening and care.

In the course of the assembly, we attended the funeral of Tatay Pastor Sabud, Fr. Larry’s father. We sympathized with the Sabud family during their time of bereavement and sadness. May Tatay Pastor enter God’s holy dwelling in peace. We also visited and prayed at the tomb of our confrere Fr. Philip Callaghan, SM, an Australian Marist who died in 2006.

In the middle of the week, we have an opportunity also to relax and recreate. We went to Paradise Island and enjoyed the company of one another while taking a plunge in the deep blue sea. It was a time to be re-energized and take a breather from the meeting.

The assembly culminated with vesper where Fr. Chris Ganzon, SM, the District Superior expressed his thanks to all the members of the unit for their lively and active participation during the assembly. As a gift, he gave each community the book of the biography of Fr. Jean Claude Colin. Dinner was served after the prayer which was attended by the members of the Marist Brothers, Marist Sisters, and the International Novitiate community. It was also a happy occasion to welcome the novices and formators in the District. Those who celebrated birthdays and anniversaries in the last few months were recognized and remembered too.

It is hoped and envisioned that whatever we discussed and discerned in the Assembly will bear fruit in our lives, communities but most especially to the poor and abandoned people whom we serve in our various ministries. We are confident that God will give us the graces to do our work with joy and courage. We are confident that Mary, our first and perpetual Superior, will accompany us and encourage us with her prayers and leadings.

We are very grateful to all of you who have prayed for each of us during our assembly. Please continue to pray for us as we continue to bring the Good news and bring hope to the poor. 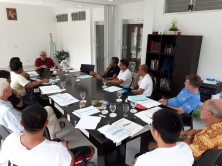 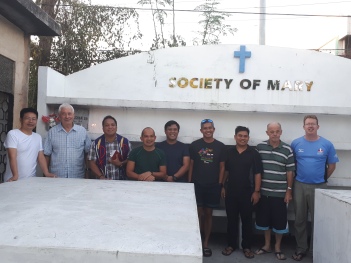