One hundred Marists – priests, seminarians, brothers, sisters and laity – gathered in Davao on 23rd July to celebrate the 200th anniversary of the Fourvière Pledge.

On 23rd July 1816, twelve diocesan priests and seminarians made the steep walk up to the Shrine of Our Lady of Fourvière in France where they signed a pledge to found a congregation of ‘Mary-ists’. Among the twelve was Fr Jean-Claude Colin SM, who became the first Superior General of the Society of Mary, and St Marcellin Champagnat SM, founder of the Marist Brothers.

200 years later, Marists gathered in various parts of the world to celebrate the day. Filipino Marists Fr Chris Ganzon and Fr Fernando Ingente were fortunate to be able to concelebrate Mass in the Basilica of Our Lady of Fourvière itself.

Those gathered in Davao made a dawn pilgrimage to the Shrine of Sto. Niño where Mass was celebrated and a re-dedication of commitment signed. 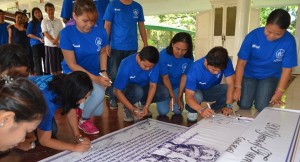 The event was marked by joy and thanksgiving for the gift of the Marist charism. Many participants spoke of their hope that the next 200 years will see many more men and women consecrated to Marist life in service of the Church. 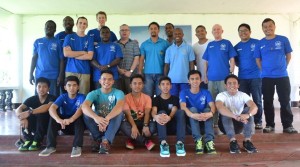