The three temporarily-professed Marists in the District of Asia have all recently renewed their vows of poverty, chastity and obedience. 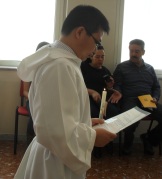 Nino Memorial SM and Roque Rebito SM have just finished their penultimate year of studies at St Alphonsus Theological and Mission Institute in Davao City. They renewed their vows in the Society of Mary for one year at the Colin House chapel on 24th March.

John Guo Wang SM is completing his final year of studies in Rome whilst living at Casa Maria, the Society of Mary’s international theologate. He renewed his vows as a Marist, also for one year, on 7th March.

Nino and Roque are now in Manila for the summer, taking a three-month Clinical Pastoral Education (CPE) course.

John Guo will return to the Philippines later in the year to begin his pastoral year.

Congraulations, Nino, Roque and John! Blessings on your commitment to religious life as Marists!