“I want to say one word to you and this word is joy. Wherever consecrated people are, there is always joy!”  Pope Francis

Pope Francis asked the whole Catholic Church to observe a year dedicated to the Consecrated Life beginning on the First Sunday of Advent, and will end on the Feast of the Presentation of Jesus in the Temple, February 2, 2016.

The Archdiocese of Davao officially opened “The Year of Consecrated Life” on November 29, 2014. The Archdiocese joins the universal Church in celebrating a year of thanksgiving and promotion of religious life in the world. The launching which started with an integrated holy hour and vespers was attended by various religious congregations of men and women in the Archdiocese. Archbishop Romulo Valles in his homily extended his gratefulness to all religious men and women. He also asked the lay faithful to support all the activities which would highlight this special year. The Archbishop also shared that the Philippine Church also celebrates this year as a “Year of the Poor.”

The Year of the Consecrated life, a universal mandate and the Year of Poor, a particular mandate, complement each other. Religious men and women by their choice vow to live a life modeled in the life and teachings of Jesus Christ. Following Christ is choosing a life of simplicity and a life free from material pressures. Religious life is a testament that joyful life does not depend on material wealth.  Many Filipinos have also been living joyfully even in the reality of poverty.

The challenge for all religious is to reflect and put into life the words of Pope Francis, “I want to say one word to you and this word is joy. Wherever consecrated people are, there is always joy!” 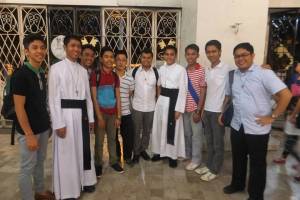