Members of the Marist Fathers and Brothers of the District of Asia held its District Assembly from 26-30 November 2018 at the District house in Davao City, Philippines. Marists from Thailand and Philippines gathered for five days to share and discuss important issues that concern the District’s life and ministries. The purpose of the gathering … END_OF_DOCUMENT_TOKEN_TO_BE_REPLACED

The Marist have been in the Philippines since 1982 and have ministered in a number of diocese in Mindanao since then.   In Cotabato (Lebak, Kalamansig, Timanan, Cotabato City), Kidapawan (Kabacan), Tagum (Diwalwal) and Bukidnon (Kalabugao)  At present we are establishing a new parish in Matti in the Diocese of Digos.  In Davao City we have … END_OF_DOCUMENT_TOKEN_TO_BE_REPLACED

Marists in Davao gathered in Dumalag Formation Community to celebrate the feast of St. Peter Chanel on 28th April. A simple liturgy was prepared which was participated by the members of the District as well as by the new college seminarians and Matti Parish volunteers. After the prayer, the Marists went out for dinner and fellowship.

St. Peter Chanel is the first Marist priest to be canonized as saint. St. Marcellin Champagnat, the founder of the Marist Brothers of the Schools was the other Marist saint. St. Peter Chanel was born in France and set out with a group of priests to Western Oceania to proclaim the Gospel. He arrived in Futuna in 12 November 1837. With courage,zeal and patience, he and his companions preached the gospel and many were converted to the faith. This conversion angered the chieftain of the island that paved the way for his martyrdom. On 28 April 1842, he was clubbed to death after preparing the King’s son for baptism.  However, 5 months after his death, the entire island had been converted to Christianity. He was beatified as a martyr in 1889 and was proclaimed saint in June 12,1954 by Pope Puis XXII. He is the patron saint of Oceania.

The feast of St. Peter Chanel is memorable to the District of Asia not only because of his heroic and exemplified life as a Marist missionary  but also because many of the Filipino Marists were ordained or took their first profession of vows on this day.

Let us be inspired by his life of courage, faithfullness, and gentleness.. May his prayers and example call forth from our midst many workers for the Gospel, so that God’s Kingdom may reach to the ends of the earth. St. Peter Chanel pray for us.

Happy feast day to all! 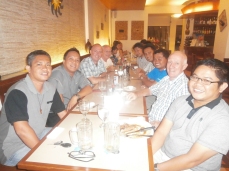